All farm animals, especially horses, pigs and cattle, perform grooming as part of their natural behaviour. The primary function of grooming is body care, including cleaning and sanitation. Grooming behaviour is thought to help animals remove mud, feces, urine, insects and parasites and, thus reduce their risk of disease.

Self-grooming by cattle often involves licking with the tongue, scratching with their hind feet, scratching with their horns (if present) and swatting with the tail in an effort to clean all areas of their bodies they can reach. To reach inaccessible parts, such as the head, neck, back and hindquarters, cattle will often scratch themselves on inanimate objects. In extensive production systems, cattle will often make use of environmental items to scratch on, such as branches, bushes, trees, fences and posts, particularly for areas of the body inaccessible to the mouth, tongue and feet. 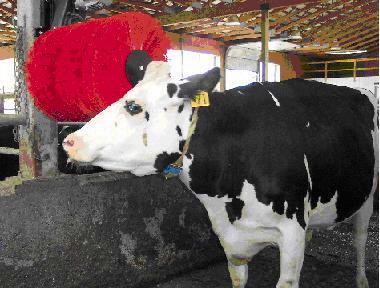 In this study 72 freestall-housed lactating dairy cows, divided into 6 equal groups, were each exposed to a control period (1 wk) and an experimental period (2 wks) where the cows were provided a mechanical brush (Luna cow brush, Lely Industries, NV; Figure 1). We analyzed and compared the duration and frequency of scratching on pen objects (wall and water trough) or on the mechanical brush by cows in the control and experimental treatments. Furthermore, we compared the relative frequency of scratching by the cows on various parts of their body (head, neck, back, tail and thigh) between the control and experimental treatments.

During the control period the cows primarily scratched themselves on the pen wall and the water trough. When the mechanical brush was added to the pen, the cows not only dramatically increased their total time spent scratching by 6x, but also increased their frequency of scratching events (i.e. number of times/d they scratched themselves) more than three fold. The huge increase in total scratching time was characterized by a decrease in time spent scratching on the wall and water trough, combined with a large amount of time scratching on the brush. Scratching on the brush represented 91% of the total scratching time. Although the increase in frequency of scratching visits was partially influenced by a decrease in scratching events on the wall, it was largely driven by a relatively large number of visits to the mechanical brush. 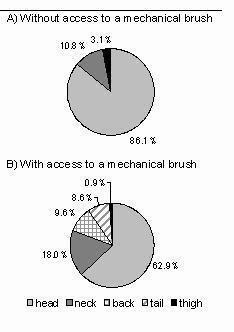 Figure 2. Relative grooming frequency at the head, neck, back, tail, and thigh of cows housed in pens without and with access to a mechanical brush.

In conclusion, the results of this study show that the use of a mechanical brush makes it easier for cows to groom themselves, particularly in places that are hard to reach by the cow. This may help satisfy this natural behaviour and improve cow cleanliness.

This report is a summary of an article recently accepted for publication in the Journal of Dairy Science. We thank the staff at The University of British Columbia’s Dairy Education and Research Centre. Special thanks also to Valley Genetics of Chilliwack, BC and Lely Canada for the provision of the Luna cow brushes and Audrey Nadalin for help in running this project. The project was funded by the Natural Sciences and Engineering Research Council of Canada, through the Industrial Research Chair in Animal Welfare, and through contributions from the Dairy Farmers of Canada and many other donors who are listed at the Animal Welfare Program.