In building a new barn, or renovating an existing facility, one key aim is to create a comfortable environment for the cow to lie down. A second important goal is to create an environment that stays relatively clean and dry, thus minimizing the risks of foot and udder infections that can result from contact with urine or feces in the bedding or on the floor. The free-stall neck rail is thought to help achieve this second aim, by discouraging cows from defecating or urinating in the stall. However, neck-rail placement is a balancing act – place it too low or too close the curb and the cow may have difficulty in entering the stall, place it too high or too far from the curb and cows may be more likely to soil the stall. Achieving this balance requires research.

In one study we housed animals either with or without a neck rail, and examined the difference in stall 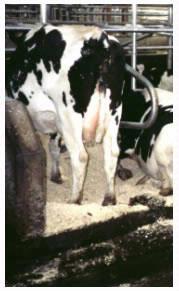 In other work we have determined how neck-rail placement affects the cow’s use of the stall. Correct placement of neck rails involves both the height from the surface of the stall and the distance from the curb. We’ve completed experiments determining how both these factors affect the cow’s lying and standing behavior in the stall.

In the experiments described in this report animals were free-stall housed with geotextile mattresses covered by either sand or sawdust bedding. Behavioral results are based on at least 24 hours of continuous monitoring, using time-lapse video recording. 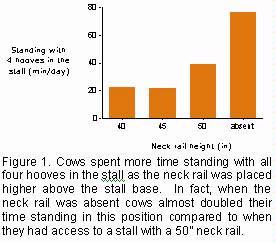 In the second experiment, neck rail height was held constant at 49.5” and we compared two distances from the curb: 60” or 67”. Again, neck rail placement did not affect how much time cows spend lying down, but it did affect the type of standing performed in the stall. Cows spent more time standing half-in-half-out when the neck rail was closer to the curb (60”), and less time standing with all four hooves in the stall (see Figure 2). p>

Lowering the neck rail and placing it closer to the curb helps keep the stall clean without affecting lying times. However, installing the neck rail in this way will increase the time the cows spend standing on the concrete flooring outside of the stall. Although we typically think about the free stall as a place for cows to lie down, the stall is also used for standing, and the less time cows spend standing on concrete, the lower the risk of hoof injuries. Higher neck rails placed further from the curb allow cows to use the free stall as a relatively dry, non-concrete standing surface. Thus neck rail placement involves a trade off between allowing cows access to a more comfortable standing surface and increased stall maintenance.

If neck rails are positioned so as to discourage cows from standing in the stall, it becomes all the more important to provide improved standing surfaces elsewhere in the pen, such as rubber flooring in front of the feeder.

Watch for future Research Reports on the topic of alternative flooring surfaces for free-stall barns.

Thanks to industry for supporting this research. Supporters are listed at the Animal Welfare Program.

This article is based on thesis research of Ph.D. student Cassandra Tucker. Dan Weary is an Associate Professor in the Animal Welfare Program and can be reached at danweary@interchange.ubc.ca