Previous work from the UBC Dairy Education and Research Centre demonstrated that calves raised in individual pens had more difficulty adapting to a group pen with five other calves after weaning than calves raised in pairs did. The more barren environment of the individual pen seemed to result in calves that were more fearful of anything new, including new environments and other calves. Perhaps because of this increased fearfulness, these calves took nearly 2 days to begin eating grain from automated feeders in their new pens, while their pair-reared peers began eating normally within hours (see Research Report Vol. 13, No. 1, 2013). These results made us wonder if socially-reared calves were ‘smarter’ than calves raised in individual pens.

A new study completed at the UBC Dairy Centre has shown that individual housing of calves during the milk-feeding period results in learning difficulties. These cognitive deficits help explain the delay these calves show in adapting to new technology like automated feeders.

This new work used innovative methods to train calves and to test their ability to learn new rules. Eight calves were housed individually and eight were housed in pairs starting at 4 days old. Learning abilities were tested in two ways, beginning with ‘reversal learning’. The calves were trained to perform a simple task: they entered a test pen in which they could go in one of two directions. If they approached a side with a black bottle, they received milk. If they went to a side with a white bottle they did not receive a reward, and instead were ‘punished’ with a brief time out period during which they were not allowed to return to either bottle. Calves from both housing conditions quickly learned to approach only the black bottle. 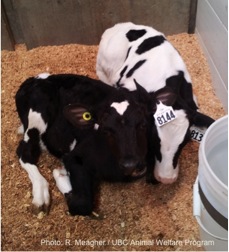 Unfortunately, in real life, rules rarely remain the same. For example, a cow may become used to entering the parlour from the left side of the barn, but one day she is regrouped, meaning that she now must enter from the right side. Successful cows (and calves) must be able to adapt to changes in their environment.

To test how the housing treatments affected the calves’ ability to adjust to new rules, we simply reversed the contingencies for the learning task. Now when calves approached the white bottle, they were rewarded with milk, and when they approached the black bottle they were ‘punished’ with a time out.  As illustrated in Figure 1, at first all the calves made mistakes, continuing to visit the now unrewarded black bottle, but after a few sessions, the pair housed calves began approaching the correct bottle. The individually-housed calves were more persistent in making the previously learned (and now incorrect) choice. These results are very similar to what has previously been found for laboratory rodents raised in social isolation: all animals can learn an initial task, but the socially reared animals do much better in coping with changes in a learning task when these occur.

Figure 1. The per cent of choices made correctly by individually-and pair-housed calves in “reversal learning” tests. Figure is redrawn from Gaillard et al. 2014.

A very simple type of learning is called habituation. This is the natural tendency of animals to become used to things after prolonged or repeated exposure; they typically show less interest in a stimulus over time. To assess this, we tested how quickly the same calves as above were able to habituate to an object they have never seen before.

Each calf was tested eight times over a two-day period by placing a red bin in the centre of their pen for 5 minutes each time. The first time calves from both housing conditions encountered the bin, they initially appeared to be fearful but eventually approached the object and began sniffing and touching it. During subsequent tests, the pair-housed calves did exactly as expected. They showed less and less interest in the bin over the multiple exposures. In other words, these calves showed a classic habituation response. In contrast, the individually-housed calves seemed to treat each new exposure to the bin as if it was their first encounter; they showed no decline in the amount of time spent sniffing and investigating the bin over the multiple exposures. In other words, the individually-housed calves failed to habituate to what to us seemed like a fairly innocuous addition to their pen.

Why should these learning deficits matter to dairy farmers? Learning difficulties that result in trouble adjusting to changes in routine and environment are likely to cause problems for both farmers and the animals. As calves mature, they are housed in groups, and must learn to adjust to new pens, group mates, and new types of feed. Researchers at the UBC Dairy Centre are continuing to investigate these effects, looking at different levels and durations of social housing. However, these results indicate calves benefit from social contact.