Dairy cows are often grouped according to age, days in milk, feed requirements and health status. To create these groupings cows, are often moved to new groups four or more times per lactation. At each regrouping, cows are mixed with unfamiliar herd mates resulting in changes in group composition and dynamics. In the new group each cow must re-establish social relationships through threats, butting and other physical and non-physical interactions (Figure 1). 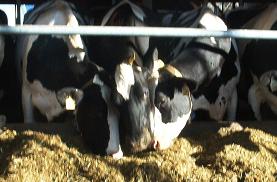 Figure 1: A cow being displaced at feed bunk

A series of recent studies at UBC have assessed the effects of regrouping on dairy cows. For example, in one study mid-lactation cows were initially observed in their home pen to monitor baseline behaviour and milk production. After the baseline period, 12 different cows were introduced individually (one at a time) into different established group of 11 cows. Feeding time, social behaviour (displacements from the feed bunk and lying stall) and lying behaviour were monitored using video cameras. Data loggers were attached to one hind leg of the each animal to measure standing and lying time.

When these cows were introduced to the new group they spent less time feeding, especially in the hour after fresh feed delivery when competition for food is typically at its peak. Newly regrouped cows were also displaced from the feeder by other cows much more frequently than before regrouping (see Figure 2). Cows also tended to spend less time lying down after regrouping, likely because cows entering a new group were often displaced from freestalls by other cows. These disruptions set back milk production; on the day after regrouping cows produced 39.7 kg/d compared with an average production of 43.4 kg/d before regrouping.

Group changes frequently occur around calving. For example, cows are often placed into a new group to facilitate dry off, moved to another group once dry, moved yet again 3 weeks before calving, moved into a maternity pen to calve, and then moved again to a lactating pen.

Cows are especially vulnerable to disease during the ‘transition’ period around calving, so a second UBC study investigated the effects of regrouping during the dry period. 48 cows were housed in groups of 6. After a baseline-recording period cows were moved in groups of 3 into a new group. In total, 8 groups of 3 were moved to a new pen with 3 cows in it, while the other 8 groups of 3 remained in their home pen and had 3 new cows introduced to them. Feeding behaviour (feeding time, feeding rate), social behaviour (displacements) and lying behaviour were monitored. In addition dry matter intake was measured using electronic feed bins and rumination time was monitored using electronic collars. 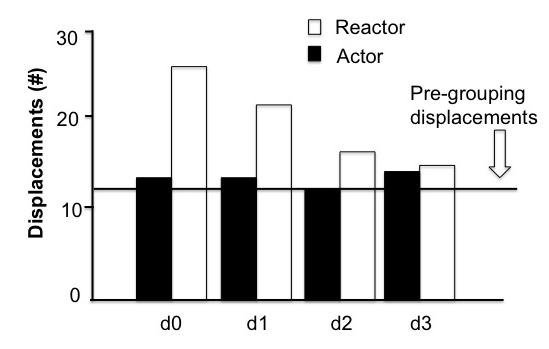 Figure 2: Newly regrouped cows were displaced from the feeder (Reactor) much more frequently on the day of regrouping (Day 0) and the day after (Day 1), but there was no difference in the number of times these cows displaced other cows (Actor).

Cows that were introduced to a new pen decreased feed intake by 9% compared to the days before regrouping; cows that remained in their home pen did not change intake.

Cows that were moved to a new pen were more likely to be displaced from the feed bins, especially during the 3 hours after fresh feed delivery. These cows also spent less time ruminating, returning to baseline values only 2 days after regrouping (Figure 3).

Both studies show the negative effects that regrouping can have on dairy cows. A comparison of these studies indicates that regrouping cows in small groups can decrease these effects. Regrouping cows at quiet periods of the day (and not close to peak-feeding times) may help to decreases the frequency of aggressive interactions. Regrouping can provide producers with some benefits but comes at a cost to the cow – this cost should be kept in mind when considering when and how often cows should be regrouped. 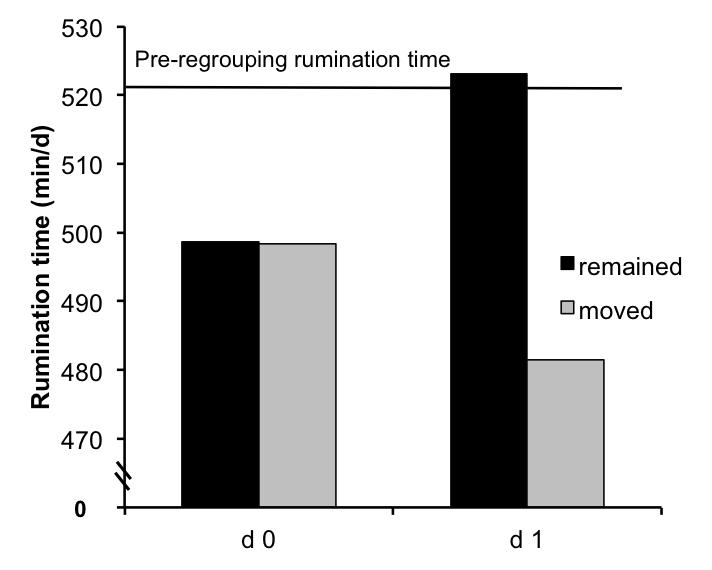 We are grateful to Lori Vickers for help preparing this report. For further information please email marina.vonkeyserlingk@ubc.ca or dan.weary@ubc.ca. This report is based on two published papers in the Journal of Dairy Science (J. Dairy Sci. von Keyserlingk et al., 2008. 91:1011-1016; Schirmann et al., 2011. J. Dairy Sci. 94:2312-2319 ). We thank the researchers and staff of the UBC Dairy Education and Research Centre for their hard work on the studies described in this report. The research was funded by the NSERC Industrial Research Chair in Animal Welfare with contributions from the Dairy Farmers of Canada and many others listed at the Animal Welfare Program.