In previous Research Reports, we have reported how stalls can be built or modified to improve comfort. However, regardless of how well your stalls are designed and built, comfort will be limited by how well stalls are maintained.

There are many advantages to using well-bedded freestalls. Cows choose these stalls over bare surfaces or those covered with a thin layer of bedding, even when stalls also contain a thick mat or mattress. Cows housed with well-bedded stalls spend more time lying down, are less likely to become lame and fewer have hock injuries.

Unfortunately, maintaining bedding in stalls can be a challenge. Soon after filling stalls with fresh bedding, cows move the bedding to the outer edges of the stall and into the alley. The resulting changes to the depth and shape of the bedding may make the stalls less attractive for cows. To make better decisions about how often to add bedding to stalls, we studied how sand bedding depth declines with time after fresh bedding is added, and how these changes in bedding level affect cow comfort.

Our ‘head-to-head’ stalls had a total bed length of 8′ and were 4′ wide between Artex Y2K dividers. Bedding was river sand, sieved over a 2-mm screen and washed with water to remove silt. We measured changes in 24 stalls (housing 24 lactating dairy cows), from the day they were filled with sand (to the height of the rear curb) and over the next 9 days. 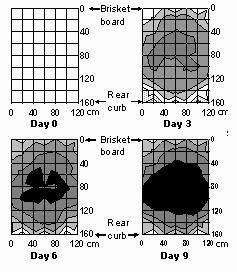 Figure 1. Contour diagrams of the average stall on 0, 3, 6, and 9 days after stalls were filled and levelled to the height of the rear curb. Contours represent decreases in sand depth, with darker colours indicating decreasing depth. Each colour change represents an average decline of 2 cm. Greater sand loss in the centre of the stalls creates a bath-tub like shape.

The most sand was lost during the first day after the stalls were filled but sand levels continued to decline over the following 9 days. Also, those stalls that were in the locations preferred by cows tended to lose sand more rapidly than stalls that were used less.

To determine how these changes in bedding depth and shape affect cow use of stalls, we experimentally imposed treatments by digging out stalls to match these conditions. In this way we determined how cows respond to stalls representing different amounts of stall maintenance.

In the first experiment we tested stalls filled to the level of the curb (like a well maintained stall), and what they looked like 3, 6 and 9 days with no maintenance (having lost up to 6 cm of sand at the deepest point).

In a second experiment we imposed levels like those seen in the stalls that lost the most bedding over the same period. In this case stalls varied from bedding level with the curb to losing as much as 14 cm of sand. To measure the effects of these conditions on lying time we again used 24 cows, and monitored behaviour using electronic sensors attached to the cows’ hind legs. These sensors automatically recorded whether the cows were lying or standing every 30 seconds.

As shown in Figure 2, cows spent less time lying down in stalls that contained less sand. On average, lying time declined by about 11 minutes per day for every 1 cm decline in bedding. In the stalls with the least bedding, cows spent 2.3 hours less time lying down each day. These differences in lying time were due to cows lying down for shorter periods each time they lay down, suggesting that the reduced bedding depths made the stall less comfortable to be lying in.

These differences in lying time associated with decreased bedding levels are as large or larger than any other stall feature we have tested in previous research on cow comfort. Thus any improvements in cow comfort associated with building or renovating freestall barns can be completely undone by poor stall maintenance. 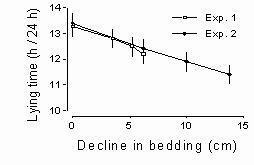 Figure 2. Changes in daily lying time as stalls lose bedding. In Exp.1 bedding levels tested represented the average stall sand depth after 0, 3, 6, and 9 days with no stall maintenance. Exp. 2 tested levels representing the stalls that had lost the most bedding on each of those days.

This research demonstrates that comfort is improved by frequent stall maintenance, such as daily raking when cows are moved to the milking parlour. In addition to improved cow comfort, better stall maintenance will help keep cows cleaner, reducing the risk of environmental mastitis.

This research was part of a project designed by visiting researcher Marek Gaworski and research assistant Michelle Drissler. Cassandra Tucker is currently a scientist at AgResearch in New Zealand and Dan Weary is a professor in the UBC Animal Welfare Program. This research was made possible through funding by the Dairy Farmers of Canada, NSERC, and many other donors listed on our website at the Animal Welfare Program.