Effect of Metritis on Intake, Milk Yield, and Culling Risk

Metritis is a common and costly disease that affects dairy cows during the early postpartum period. (Figure 1). Researchers at the UBC Dairy Centre have completed a number of studies investigating the relationships between health and behaviour of cows during the transition period and have found that both feeding behaviour and dry matter intake (DMI) can be used in the early detection of disease (Research Report Vol. 10 No. 1). One of these studies characterized prepartum behaviour and DMI of cows that developed metritis after calving. Relative to the healthy cows, those that developed metritis after calving spent less time at the feed bunk and had lower dry DMI as far back as 2 weeks prior to calving (approximately 3 weeks before clinical signs of disease were evident).

Figure 1. Cows are highly susceptible to disorders like metritis during the weeks after calving.

While this work highlights that metritis can have negative consequences on the behaviour and intake of transition dairy cattle, there has been limited research investigating the long-term impact of these changes on both milk production and culling risk.

To explore the long-term consequence of metritis, data from two previous transition cow studies were combined. Using only data from multiparous cows a population of 43 healthy animals (no fever or other clinical signs of disease by 21 days post-partum) and 16 metritic animals (had a fetid, foul smelling vaginal discharge, with a fever greater than 39.5°C by 21 d postpartum) were identified. Individual animal DMI was monitored for 21 days after calving for all experimental animals using an ectronic feeding system (Insentec). During this time cows had ad libitum access to both feed and water.

Metritis during early lactation had an overall negative impact on the milk production by multiparous cows. These animals produced less milk than those that remained healthy. This reduction in milk yield was not only experienced during the metritis infection but also throughout the first 20 weeks of lactation, despite all sick cows receiving veterinary care (Figure 2).

Figure 2. Multiparious cows with metritis have lower average daily milk yields throughout the first 20 weeks of lactation compared to healthy multiparious cows. *Weekly averages are based on 7 days of data.

Cows with metritis and lower milk yield also had reduced feed intake during the first 21 days after calving (Figure 3). 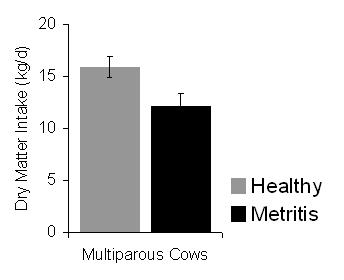 Figure 3. Dry matter intake (DMI; kg/d) is lower during the 21-day period after calving for cows diagnosed with severe metritis relative to cows that remained healthy.

Culling decisions for the study farm were made prior to any indications of reproductive problems, as most of the cows with metritis that were culled were never bred. This finding indicates that culling decisions were likely based on disease status and low milk production in early lactation, rather than reproductive performance.