Improved reproduction in dairy herds has a marked effect on profitability. Many recent studies have shown that, under modern management and housing systems, delay in the onset of postpartum cycling, inaccurate detection of estrus, and early embryonic mortality are the major reproductive problems. It is generally agreed that estrus detection efficiency is around 50% in most dairy herds. Therefore, there is an urgent need to develop and apply new technology that will eliminate the need for estrus detection.

Recent research findings have provided a greater understanding of ovarian follicular and corpus luteum (CL) dynamics, and based on this understanding, new protocols to synchronize ovulation that allow fixed-time artificial insemination without the need for estrus detection have been developed. In the Ovsynch protocol, two injections of gonadotropin releasing hormone (GnRH) are given 9 days apart, with a Prostaglandin F2a (PGF2a) injection given 7 days after the first GnRH treatment. The first GnRH treatment initiates the growth of a new follicular wave, and potentially ovulates a large follicle that is present. The PGF2a injection causes corpus luteum regression, and the second GnRH synchronizes ovulation. Fixed-time artificial insemination is performed about 16 h after the second GnRH injection. Although pregnancy rates after Ovsynch and fixed-time insemination have been shown to be comparable to that after artificial insemination at detected estrus, premature ovulation has been reported to negatively affect pregnancy rates in some trials.

The inclusion of a Controlled Intra-vaginal Drug Release (CIDR) device, releasing Progesterone (P), in Ovsynch-type protocols can prevent premature ovulation. A CIDR-based protocol that allows fixed-time insemination has been successfully used in beef cattle and dairy heifers and approved for commercial use. This protocol consists of initial injections of estrogens (ECP) and progesterone to cause regression of large follicles present and to initiate the growth of a new follicular wave, with concurrent insertion of a CIDR device. Seven days later PGF2a is injected to cause the regression of an existing or induced corpus luteum. The CIDR, which has acted as an artificial corpus luteum, blocking ovulation, is removed after the PGF2a injection. A second estrogen injection is given 2 days after the PGF2a to synchronize ovulation. Fixed-time artificial insemination is performed approximately 28 h after the second injection. See Table 1 for a detailed schedule of the Ovsynch and CIDR-based protocols adopted for the present study.

At the UBC Dairy Education and Research Centre in Agassiz, we used 227 postpartum lactating Holstein cows to compare ovulation synchronization rate, corpus luteum function and pregnancy rates of the two different timed breeding protocols described above. Ovulation was determined to have occurred in cows with milk progesterone levels less than 1ng/ml on day of insemination, and greater than 1ng/ml on Day 7 post insemination. Milk progesterone levels were used to assess response rate to ovulation synchronization protocols and corpus luteum function. Pregnancy rate was determined by ultrasound on Day 35, and then verified by rectal palpation on Day 60. The treatments were initiated regardless of the stage of the oestrous cycles of the experimental animals. 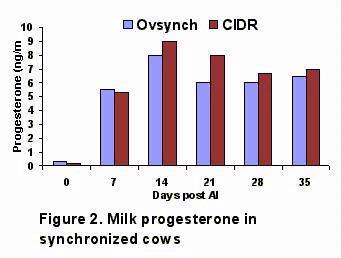 Even though both protocols were effective for ovulation synchronization and fixed-time artificial insemination, the CIDR-based protocol numerically outperformed Ovsynch in this experiment. Both protocols can be initiated regardless of the stage of the oestrous cycle of the animals. Although the overall pregnancy rates of 31% and 41% obtained for Ovsynch and CIDR- based protocols, respectively, were comparable to those seen in lactating cows in many dairy herds today, pregnancy rates were higher (P

This research was conducted at the UBC Dairy Education and Research Centre in Agassiz. Dr. Raja Rajamahendran is a Professor of Animal Science at UBC, and Jeff Nimmo is Dr. Rajamahendran’s undergraduate research assistant. Dr. Divakar Ambrose is a Dairy Research Scientist with Alberta Agriculture, Food and Rural Development in Edmonton. Dr. Muhammad Aali was a graduate student in Animal Science at UBC, and Nelson Dinn is the Manager of the Dairy Centre in Agassiz.