By: M. Hirad and R. Rajamahendran *

Dairy producers are well aware that reproductive efficiency in their herds has a marked influence on profitability. A calving interval of 12 to 13 months is generally considered to be economically optimal, but often difficult to achieve. Key factors in achieving this goal are the incorporation of efficient and accurate heat detection, proper semen handling and servicing techniques, and timely insemination relative to ovulation of the egg. Estrus (heat) detection has been cited as the most important factor affecting the reproductive success of artificial insemination programs. However, proper control of the time of estrus is difficult, since peak estrus activity often occurs at night, and determination of the actual onset of standing estrus may be difficult without 24 hour observation. In work underway at the UBC Dairy Education & Research Centre at Agassiz, we have demonstrated estrus synchronization and timed breeding as a method that could eliminate the need for estrus detection altogether.

To understand estrus synchronization, we need to review the hormonal control of reproduction. During a normal estrous cycle, gonadotropin releasing hormone (GnRH) is produced by the hypothalamus resulting in the release of follicle stimulating hormone (FSH) and luteinizing hormone (LH). These hormones act to cause the growth and development of follicles, which are structures on the ovary housing the developing eggs. Most of the follicles will regress, but one will become dominant and eventually ovulate. After ovulation, a corpus luteum (CL) is formed in place of the follicle. The CL is responsible for the production of progesterone, which is a hormone necessary to maintain pregnancy. If pregnancy does not occur, another hormone, prostaglandin, is released and acts to regress the CL, thereby initiating another cycle. By understanding these events, it is possible to develop ways to control the estrus phase of the cycle. For instance, various methods to synchronize estrus have been developed. If the approximate time of estrus is known, then estrus detection rates will be higher. Estrus synchronization followed by timed inseminations, can even avoid the need for estrus detection. 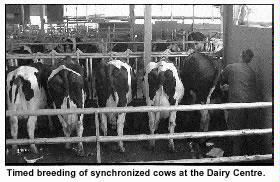 We recently compared two such protocols, “Ovsynch” vs “Prostaglandin”. Forty-six cows in the “Ovsynch” group were given an injection of GnRH followed by an injection of prostaglandin after 7 days. Kamar heat detectors were placed on the tail-head to aid in estrus detection. Forty-eight hours after prostaglandin, the animals were again treated with GnRH. Timed artificial insemination was done 12 and 36 hours later. Cows in the “Prostaglandin” group (also 46) received two injections of prostaglandin 14 days apart and Kamar heat detectors were put in place at the time of the second injection. Timed AI was done 60 and 84 hours after the second injection.

For both groups, milk samples were obtained on the day of breeding and 7, 14, and 21 days after breeding. The concentration of progesterone in the milk was measured over time using a technique called radioimmunoassay. Progesterone levels, which are low during estrus, can be used to confirm whether the animal was in estrus on the day of breeding. Progesterone levels will rise if ovulation and the formation of the CL occurred but will decrease again if conception did not occur. Pregnancy diagnosis was done on all animals using ultrasound 35 days after insemination.

Our work showed that estrus synchrony was equally good in both groups. In addition, we found that milk progesterone concentrations were a much more reliable indicator of estrus than the Kamar heat detectors. Milk progesterone levels 7, 14, and 21 days after breeding were not different between the two groups, indication that the estrus synchronization method did not affect the function of the CL. Most improtantly, we found that animals in the “Ovsynch” group had a significantly higher pregnancy rate than those in the “Prostaglandin” group (62% vs 40%).

Therefore, although both methods of estrus synchronization resulted in the same degree of synchrony, the “Ovsynch” method resulted in higher pregnancy rates in lactating cows. This method also eliminates the need for estrus detection. It could help to improve reproductive management of dairy cattle and achieve that optimum 12 to 13 month calving interval.

Watch this newsletter for further information about this research and other work from the Animal Reproduction and Reproductive Technologies Program at the UBC Dairy Education & Research Centre, located in Agassiz.