A total mixed ration (TMR) should provide a nutritionally balanced diet with all nutrients that cattle need to grow and function well. However, on farms the quality of the TMR may vary between days (in relation to inputs and mixing), within days (due to sorting by cows or environmental exposure), and along the feed bunk (due to improper mixing or uneven feed distribution and usage). Recent research at UBC has shown that this variability can have profound affects on dairy cattle feeding behaviour.

Animals generally search for the most profitable feeding sites (i.e. locations with the highest nutrient density) in order to make the most efficient use of feeding time. Often these sites are also associated with highly palatable feed which makes these locations even more desirable. Searching behaviour allows animals to locate higher quality feeding sites, but this exploration also requires time during which animals are not feeding. High levels of searching may make feeding behaviour less efficient by decreasing the time spent at the bunk and increasing competitive behaviour over access to preferred feeding locations.

The aim of this study was to measure how variation in TMR quality affects the feeding behaviour of dairy heifers. 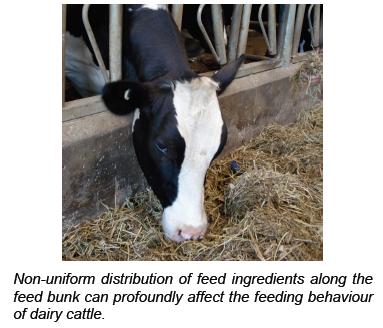 Thirty-two, 7-month old Holstein heifers were divided into 4 groups each consisting of 8 animals. All animals in each group pen had free access to 8 feeding stations (bins). Three different TMR qualities were used in this study: low energy, moderate energy and high energy. The TMR was a mix of fescue hay, corn silage, grass silage and grain concentrate. The energy density of the TMR was modified by adjusting the amount of grain in the mix. The grain component made up 0, 24 or 39 % of the total dry matter of the Low, Moderate and High diets, respectively.

The study lasted 9 days. To simulate variation in TMR quality along the length of the feed bunk, 7 feed bins were filled with the low quality TMR and 1 bin, positioned at random on days 1, 2, 4, 5, 7, and 8 of the study, was filled with the high quality TMR. On days 3, 6 and 9, all 8 feed bins were filled with either Low, Moderate or High quality TMR to simulate unexpected changes in TMR quality between days. By the end of the 9-day study period all 4 groups of animals experienced a TMR change to each of the 3 different qualities of TMR. The average quality of the TMR (across all 8 bins) on these 3 test days was either higher (Moderate and High TMR) or lower (Low TMR) than what the heifers experienced on the day previous, when TMR distribution was non-uniform along the length of the feed bunk.

To determine how variation in TMR quality affected feeding behaviour, heifers within each of the 4 groups were arranged into pairs for observation. Before the morning feed delivery all heifers were moved to the back of the pen and then 1 pair at a time was allowed access to the fresh feed for 15 minutes. Feed bins were refilled after each 15-minute period. The number of times heifers switched between bins and the average time spent at each bin was recorded. The number of competitive interactions (displacements and attempts to displace) that occurred between the heifers was also recorded.

Heifers explored their feeding environment more (more switches between bins) when offered a lower energy density TMR than what they experienced the previous day (i.e. during the non-uniform period; Figure 1). In contrast, switching decreased when TMR was changed to a higher quality than what was experienced on the previous day (Figure 1). This change in sampling behaviour was likely driven by sensory cues from the diet (i.e. taste, texture, smell) more so than by how the animal felt after feeding (e.g. feeling satiated) since the observations occurred within a short period following exposure to fresh feed. 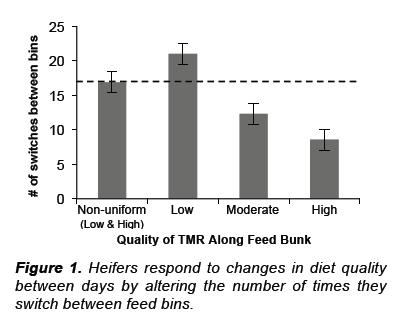 The time spent at each feed bin was 47 % shorter on the day heifers were switched to lower quality TMR relative to the day before when they received the non-uniform TMR. The average time spent at each bin increased by 27 % and 74 % on the days the TMR was switched to a higher quality than experienced on the previous day (Moderate and High TMR qualities, respectively).

Competitive interactions at the feed bunk occurred most frequently when TMR quality was non-uniformly distributed among bins at the feed bunk (Figure 2). When TMR quality was the same in all bins (regardless of quality level) competition for feed was reduced (Figure 2). During the days heifers were fed the non-uniform TMR, only one heifer could occupy the high quality feed bin at a time. The other heifer was forced to either wait for access to high quality feed bin or eat a lower energy diet. In general, one heifer in each pair was more successful at maintaining access to this high quality bin, spending on average 11 minutes feeding at this location compared to only 2 minutes for her pen mate. 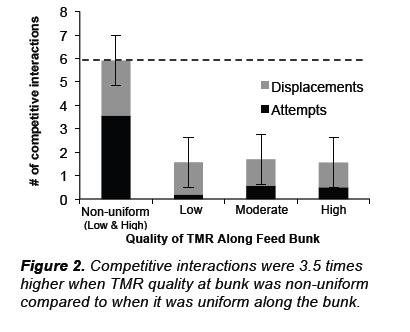 Cattle respond to variation in TMR quality by changing the way they explore their feeding environment.
When TMR quality is lower than previously experienced heifers spend more time ‘grazing’ the feed bunk. They move more between feeding locations and spend less time at each location.
Competitive interactions between heifers are more frequent when TMR quality is not uniformly distributed along the length of the feed bunk. Cattle are highly motivated to obtain access to the highest quality feed locations.
Minimizing variation in TMR energy density between and within days will help promote more efficient feeding behaviour.

We are grateful to Julie Huzzey for help preparing this report. For further information please Email marina.vonkeyserlingk@ubc.ca or dan.weary@ubc.ca. This report is based on a paper recently accepted for publication in the Journal of Dairy Science (Huzzey et al. In Press. J. Dairy Sci.). We thank the researchers and staff of the UBC Dairy Education and Research Centre and especially Jose Fregonesi who collaborated in the work described in this report. This research was funded by NSERC. The UBC Animal Welfare is also supported by the Dairy Farmers of Canada and many others listed at the Animal Welfare Program.