Previous research by our group has shown that the delivery of fresh feed is the primary driver stimulating dairy cows to get up and eat. Traditionally most dairy producers provide a total mixed ration (TMR) to their lactating dairy cattle twice per day (2x). However, many producers are electing to feed their cows only once per day (1x), as a means of reducing labour costs.

There has been some concern that providing feed 1x may result in slug feeding, which could predispose a cow to sub-acute ruminal acidosis. Alternatively, more frequent offerings of feed may result in cows spreading out their feeding time more evenly throughout the day. Further, a steady input of nutrients into the rumen over the course of the day should benefit rumen function, which in turn may reduce the risk for sub-acute ruminal acidosis.

Questions have been raised regarding the effect of frequency of feed delivery on the quality of the TMR consumed by the cows over the course of the day. Cows have been shown to preferentially sort for the grain component of the TMR, leaving behind the longer forage components resulting in an increase in the fibre content of the remaining feed. This effect is thought to be greatest when frequency of feed delivery is low. This may result in cows that are unable to feed at the time of fresh feed delivery, possibly due to increased competition, consuming a ration that is not balanced to meet their nutritional requirements.

In reviewing the scientific literature it appears that there is little work addressing these issues surrounding the frequency of feed delivery. Therefore, we set out to investigate how the frequency of feed delivery affects the behaviour of group-housed lactating dairy cows and how it affects the extent of feed sorting. These questions were addressed in two experiments, the first comparing the effects of delivering feed 1x to 2x, and the second comparing the effects of delivering feed 2x to four times per day (4x). To ensure that feed was always available for the 1x, 2x, and 4x treatments, feed was pushed-up 3, 2 and 0 times per day, respectively. In each experiment, 48 lactating Holstein cows were split into groups of 12 and subjected to each of the two treatments for two weeks. In both experiments the same TMR (50:50 forage:concentrate ratio) was provided in equal amounts to each group, regardless of treatment.

Increased frequency of feed provision increased the time cows spent feeding each day in both experiments (see Figure 2). It also changed the distribution of daily feeding time, resulting in cows having more equal access to feed throughout the day. Frequency of feed delivery had no effect on the daily lying time of the cows or the daily incidence of aggressive interactions at the feed bunk. However, subordinate cows were not displaced from the feed bunk as frequently when all cows were fed more often. 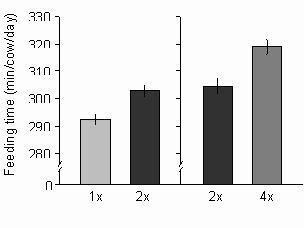 Figure 2. Cows spend more time feeding throughout the day as the frequency of feed delivery increases. 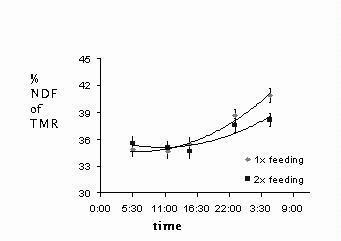 Figure 3. The more rapid increase in fibre (NDF) content of the TMR during the 1x treatment indicates that more feed sorting occurred. Feed delivery occurred at 5:30 for the 1x and at 5:30 and 15:15 for the 2x treatment.

The increased sorting in the first experiment translated into the feed refusals (collected at 5:00) containing 8% more forage when the cows were fed 1x compared to when they were fed 2x.

In conclusion, these results indicate that more frequent delivery of feed improves access to feed for all cows. Further, delivering feed 2x compared to 1x will reduce the variation in the composition of feed consumed by the cows. This could have dramatic effects for submissive cows, which may have inadequate access to feed during peak feeding times.

This article is based on thesis research of Ph.D. candidate Trevor DeVries, who is supported by a NSERC Canada Graduate Scholarship. Dr. Marina (Nina) von Keyserlingk is an Assistant Professor in the UBC Animal Welfare Program located in the Faculty of Land and Food Systems. Thanks to Danica Olenick, Kiyomi Ito, Dineke van den Hazel and the staff of the UBC Dairy Education and Research Centre for their help with this research. We also thank Dr. Karen Beauchemin and Agriculture and Agri-Food Canada for the feed analyses. This research was made possible through funding by the Dairy Farmers of Canada, NSERC, and many others listed at the Animal Welfare Program.