Rearing healthy milk-fed heifers is one of the many challenging tasks facing dairy producers. Calves normally provided milk at 10% of their body weight (~ 4 kg / day), are vulnerable to disease, often fail to gain adequate weight and can sometimes experience high levels of mortality. However, research has shown that some of these problems can be avoided by providing pre-weaned dairy calves with more milk.

Continuous access to milk results in greater milk intake and higher weight gains. Providing access to milk via a teat allows the calf to express normal sucking behaviour, while reducing non-nutritive sucking and increasing secretion of hormones important in the digestion process. However, improving access to milk raises practical problems, such as maintaining milk quality throughout the day, especially in warm weather. 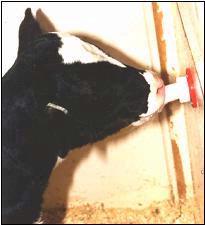 In our 4 week long experiment we housed 28 female Holstein calves individually and provided milk through a rubber teat. Calves also had access to calf starter and water from a bowl drinker.

Calves in both treatment groups gained weight rapidly (approximately 1.1 kg/day). In fact there was no difference in average daily gain between the two treatment groups, despite a modest decline in milk consumption by calves on the 4 h/d treatment (intakes of approximately 10.0 kg/day versus 11.2 kg/day). Our behavioural observations showed that during the 4 h/d when milk was available to all, the calves on the 4 h/d treatment spent more time at the teat than the 24 h/d calves. (Figure 2)

Figure 2. Mean time calves spent sucking on the teat, shown separately for calves that had access to milk 24 h/d and those that had access twice a day for 2 h each, a total of 4 h/d. Both groups spent most time at the teat when the
fresh milk was provided twice daily.

Calves on the 4 h/d treatment almost never visited the teat during the 20 h/d that milk was not available to them, suggesting that the calves were not unduly disturbed by milk unavailability. Similarly, the calves fed milk 4 h/d appeared to have no trouble adjusting their time spent at the teat to times when milk was accessible to them.

In conclusion, our results show that feeding calves milk during only a few hours each day allows for similar performance to when calves have access 24 h/d.

With restricted periods of free access to milk, calves can adjust their milk feeding behaviour with no detrimental effects on weight gain. Calves provided milk for only 4 h/d spend slightly less time drinking and tend to consume less milk, but are able to maintain similar weight gains as calves provided with continuous access to milk. These results apply well for calves housed individually. In other work we have found that group-housing calves can result in competition for milk and for teats. New work is now required to determine if restricted periods of milk access would also be suitable for group-housed calves.

This article is based on research conducted by M. von Keyserlingk, F. Wolf, M. Hötzel and D.M. Weary and published in the Journal of Dairy Science in 2006. We thank the staff and students at the University of British Columbia’s Dairy Education and Research Center and Animal Welfare Program. We are grateful to Nicole Fenwick for help preparing this report. Drs. Marina (Nina) von Keyserlingk and Dan Weary are professors with the UBC Animal Welfare Program located in the Faculty of Land and Food Systems. Funding was provided by the NSERC Research Partnership Support Program made possible by contributions from the Dairy Farmers of Canada and the many others listed at the Animal Welfare Program.