Dairy cattle housed in free stall barns are normally separated from the feed delivery area by some sort of barrier. Barriers are important as they prevent cattle from walking and defecating on the feed. They have been designed to allow cows unrestricted access to feed, however, the design and management of these barriers may affect the ability of cows to access feed.

One particular management factor that can influence the ability of cows to access feed is the amount of available feed bunk space. Previous work by our group (see UBC Research Reports Vol 3 No 3 and Vol 6 No 3) has shown that increased space allowance per cow at the bunk reduces competition and improves bunk access, especially for subordinate animals. Even though decreasing stocking density at the feed bunk will reduce competition and increase feed access, competition is not eliminated at the feed bunk. This suggests that there are additional factors affecting competition for food resources by lactating dairy cows.

In our previous research we have shown that the use of a feed barrier that provides some physical separation between adjacent cows (such as headlocks) can reduce competition (displacements) at the feed bunk, and that subordinate animals experienced the greatest decreases in competition. Unfortunately, cows also show reduced feeding time when fed using a headlock feed barrier, possibly due to a learned aversion to being restrained in locking headlocks.

Figure 1. A cow at a feed bunk with feed stalls.

Twenty-four lactating Holstein cows were subjected to each of three treatments in three successive 10-day treatment periods using a 3 x 3 Latin square design. The treatments tested were: 1) 0.64 m (~2 ft) of feed bunk space/cow, 2) 0.92 m (~3 ft) of feed bunk space/cow, and 3) feed stalls (0.92 m of feed bunk space/cow plus feed-stall partitions separating adjacent cows). Time-lapse video was used to record the feeding and standing behavior, as well as the aggressive behavior (displacements) displayed at the feed bunk by the cows. To meet our first and second objectives, we compared the data from the 0.64 m/cow to the 0.92 m/cow treatment and the 0.92 m/cow to the feed stall treatment, respectively.

Total daily feeding time increased when feed bunk space was increased from 0.64 to 0.92 m/cow (Figure 2). Further, the time spent standing in the feeding area while not feeding (not shown) and the frequency of aggressive interactions (Figure 3) at the feed bunk decreased when more bunk space was provided. The addition of the feed stalls resulted in an even further increase in feeding time and decrease in aggressive interactions for the cows compared to when they were provided with 0.92 m/cow of bunk space. 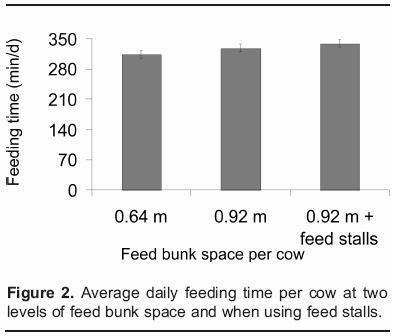 The feed stalls also forced cows to change the strategy by which they displaced others from the feed bunk. The presence of the feed stalls forced the cows to initiate contact at the rear of the animal they were displacing rather than from the front or side as in the case of the other two treatments. Further, subordinate cows experienced the greatest decreases in the number of times they were displaced per day when they were provided additional feeding space, and this effect was strongest when the feed stalls were present. 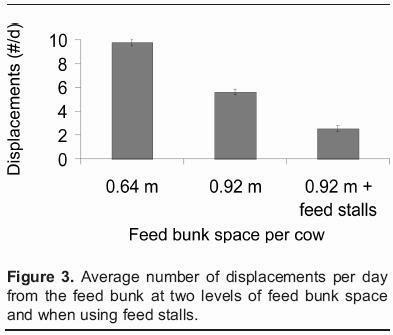 The results indicated that the provision of increased feed bunk space, particularly when combined with feed stalls, will improve access to feed and reduce competition at the feed bunk, especially for subordinate cows. We predict that this may be important for transition cows, as improved bunk access may help these animals maximize their feed intake to meet their energy demands. To verify this, our current research is directed at determining the implications of increased feed access and reduced competition at the feed bunk on the dry matter intake, milk production, and health of lactating dairy cows, particularly those in early lactation.

This report is a summary of an article published in the Journal of Dairy Science (DeVries and von Keyserlingk. 2007. J. Dairy Sci. 89:3522-3531). This article is based on Ph.D. thesis work of Dr. Trevor DeVries, who was supported by a NSERC Canada Graduate Scholarship. Dr. Marina (Nina) von Keyserlingk is an Associate Professor in the UBC Animal Welfare Program located in the Faculty of Land and Food Systems.

We thank The University of British Columbia’s Dairy Education and Research Centre. In particular we thank Kiyomi Ito, Audrey Nadalin, Dan Weary, and Julie Huzzey for their assistance with this study. The project was funded by the Natural Sciences and Engineering Research Council of Canada and through contributions from many other donors who are listed at the Animal Welfare Program.