The importance of milk in the nutrition of the Canadian population requires strict quality control of this product and control of mammary gland infections (mastitis) of the dairy cows. Mastitis is one of the major causes of economical loss to the dairy industry, averaging $150-$250/cow/year. This disease is mostly caused by bacteria such as Coliforms (Escherichia coli, Klebsiella spp., Enterobacter spp, Citrobacter spp), Streptococci (S. uberis, S. agalactiae, S. dysgalactiae) and Staphyloccocci [(S. aureus and coagulase negative staphylococci (CNS)]. The CNS are designated as “skin flora opportunists” since they are a part of the normal teat skin flora.

CNS bacteria can colonize the teat canal and infections are usually subclinical resulting in individual quarter somatic cell counts (SCC) increasing only about two-to three-fold above that of uninfected quarters. In recent years CNS are increasing in importance as causes of bovine intra-mammary gland infection throughout the world. The CNS can cause tissue damage and decrease milk production. Most CNS infections are transient. Cows and heifers have a higher prevalence of CNS infection after calving, with a rapid decline during the first week or two of lactation. Because CNS are commonly found on teat skin and in the streak canal, they can cause milk contamination.

Isolation and identification of mastitis pathogens including CNS is a fundamental aspect of milk quality and udder health control programs. There is an increasing demand for development and evaluation of the milk culture method and rapid and accurate identification of bacterial species.

Identification of mastitis pathogens and the determination of their antibiotic susceptibility or resistance are important when selecting appropriate antimicrobial therapy. The purpose of the work presented in this Research Report was to isolate CNS and to determine their susceptibility to antibiotics. In addition the number of E. coli and other Coliforms in healthy cow’s milk was quantified.

Milk samples (20 ml) obtained during December 2004 and January 2005, were taken aseptically from all quarters of 83 healthy Holstein cows and cultured to determine the presence of CNS and total numbers of E. coli and Coliforms by standard procedures according to the National Mastitis Council. Results were expressed as number of bacteria per ml of milk. Antibiotic susceptibility testing was performed by the disk diffusion method. Isolates were categorized as susceptible, intermediate and resistant based upon interpretive criteria developed by the Clinical Laboratory Standard Institute. 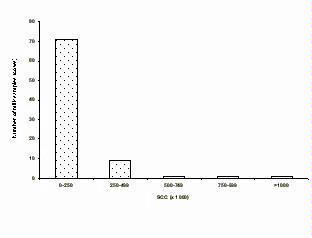 As shown in Fig. 1, the majority (85%) of the milk samples had low SCC (= 250,000 cells/ml). Staphylococci (30%) and Coliforms (26%) were isolated from the milk samples with low SCC (Fig. 2). The high environmental bacteria (coliforms and CNS) number in milk may be the result of poor milking time hygiene and poor animal cleanliness.

This study shows that antibiotic resistant CNS can be present in milk from dairy cows without any signs of infection. These bacteria could come from the cow’s environment. Generally, the concentration of somatic cells serves as an indirect measure of the level of infection in the cow’s mammary gland. Our results indicated that milk with low SCC can contain CNS and Coliforms.

Attention to good milking and barn hygiene is important to decreasing the risks of contamination of raw milk by such environmental bacteria during milking. 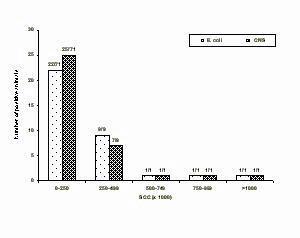 Figure 2. Percentage of positive milk samples to E. coli and CNS as a function of somatic cell counts (SCC) 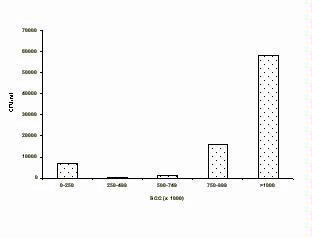 Figure 3. Mean of the total coliforms number [colony forming unite (CFU)] per ml of milk as a function of somatic cell counts (SCC).

This work is part of MSc thesis research by Mariam Dembelé, who was supported by a Canadian International Development Agency Scholarship. Dr. S. Messier is a Professor at the Faculté de Médecine Vétérinaire, Université de Montréal, St-Hyacinthe, Nelson Dinn is Manager of the UBC Dairy Education and Research Centre. Dr. Moussa S. Diarra is a Research Scientist at Agriculture and Agri-Food Canada, Agassiz, BC. This study was supported by Agriculture and Agri-Food Canada.